Salamína, is the largest Greek island in the Saronic Gulf, about 2 km off-coast from Piraeus and about 16 km west of central Athens. The chief city, Salamina, lies in the west-facing core of the crescent on Salamis Bay, which opens into the Saronic Gulf. On the Eastern side of the island is its main port, Paloukia, in size second in Greece only to Piraeus, the port of Athens.

Salamis island is known for the Battle of Salamis, the decisive naval victory of the allied Greek fleet, led by Themistocles, over the Persian Empire in 480 BC. It is said to be the birthplace of Ajax and Euripides, the latter's birth being popularly placed on the day of the battle. In modern times, it is home to Salamis Naval Base, headquarters for the Hellenic Navy. The oldest known counting board was discovered on Salamis Island in 1899. It is thought to have been used by the Babylonians in about 300 BC and is more of a gaming board rather than a calculating device. It is marble, and has carved Greek symbols and parallel grooves. During the German invasion of Greece in World War II, the harbor was bombed by the Luftwaffe on April 23, 1941, sinking the Greek battleships ‘Kilkis’ and ‘Lemnos’. In the 1960s and 1970s, during the military junta period, changes in land legislation allowed the subdivision of land plots. This opened the island to massive unplanned and unregulated urban and suburban development, including many weekend homes, especially along the northern and eastern coasts.

Salamis has an area of 93 km2 (36 sq mi); its highest point is Mavrovouni at 404 m (1,325 ft). A significant part of Salamis Island is rocky and mountainous. On the southern part of the island a pine forest is located, which is unusual for western Attica. While the inland inhabitants are mainly employed within the agricultural sector, most Salamis' inhabitants work in maritime occupations (fishing, ferries, and the island's shipyards) or commute to work in Athens. The maritime industry is focused on the north-east coast of the island at the port of Paloukia, where ferries to mainland Greece are based, and in the dockyards of Ampelakia and the north side of the Kynosoura peninsula. Salamis Island is extremely popular for holiday and weekend visits from Athens mainland; its population rises to 300,000 in peak season of which nearly 31,000 are only permanent inhabitants. This supports a strong service industry sector, with many cafes, bars, ouzerias, tavernas and consumer goods shops throughout the island. On the south of the island, away from the port, there are several less developed areas with good swimming beaches including those of Aianteio, Maroudi, Perani, Peristeria, Kolones, Saterli, Selenia, and Kanakia. Municipality Salamis Island belongs to the Islands regional unit of the Attica region. Since the 2011 local government reform the island is administered as one municipality. Before, the island was divided into two municipalities, that became municipal units at the reform: Salamina and Ampelakia.

VILLAGES IN THE MUNICIPALITY OF SALAMINA

Paloukia Paloukia is located in the northeast of the island. Many ferryboats, fishing vessels and port police craft dock in this harbor. Paloukia is the base for the port police department of Salamina. Most visitors who come to Salamina first arrive at Paloukia via ferryboats that run between Paloukia and Perama or Piraeus. The area is adjacent to the Salamis Naval Base (in Greek Nafstathmos), which is a major base of the Hellenic Navy. Aianteio Aianteio is a large village in the southwestern part of Salamis Island and is named after Ajax, the leader of the Salamineans from Homer's Iliad. The village was known as Moulki (Μούλκι) until 1915. In the region, there are churches from the 11th and 12th centuries such as Saint John and Saint Dimitrios. Interesting places to visit are: • the oldest church in the island, Saint John the "Kalyvitis", which dates back to the 10th century and has remarkable hagiographies • the monastery of Saint Nicolas which dates to the 18th century and is situated in a forest. Batsi Batsi is a little community in the north of Salamis, in the municipality of Salamis, located at the foot of a piney mountain, about 6 to 8 km east of Megara. In the mountain, there is a cave of archeological interest that has not been investigated yet. In the winter there are few tourists; it is more popular with vacationers from Athens during the summer months. Kaki Vigla Kaki Vigla is a small community located at the south of Salamis Island, near Aianteio. The beaches of Kaki Vigla are relatively clean and the area has pine and olive trees near the shore. Peristeria Peristeria is a small village in the southeast of the island 45 km (28 mi) from Salamis City. It took its name from the bird of peace, the dove (Greek: περιστέρι), because it is a calm, peaceful and isolated place, away from the cars and from noise. Another interpretation says that its name may be derived from the doves which were living and had nests in the area. Psili Ammos Psili Ammos, which means Fine Sand is so named because it is covered with sand. The area is located at the northwest of the island opposite of Elefsina. In the area there is one of the oldest landmarks, the chantry of Saint Grigorios (Saint Gregory). Steno Steno is a small community in the northwest of Salamis Island. The area is separated from Fanaromeni Monastery by a hill with shrubs and pine trees. The area is adjacent to the bay of Agios Georgios. Steno has wide and well-planned roads. Vasilika Vasilika which means Royal is a big village located in the northwest of the island. This is the third largest area in Salamis by population after Salamis City and Aianteio. Vasilika has a sandy large beach apt for swimming. Xeno Xeno is located in the northwest corner of the island. The area was so named because the first residents were not from Salamis but from nearby Piraeus. 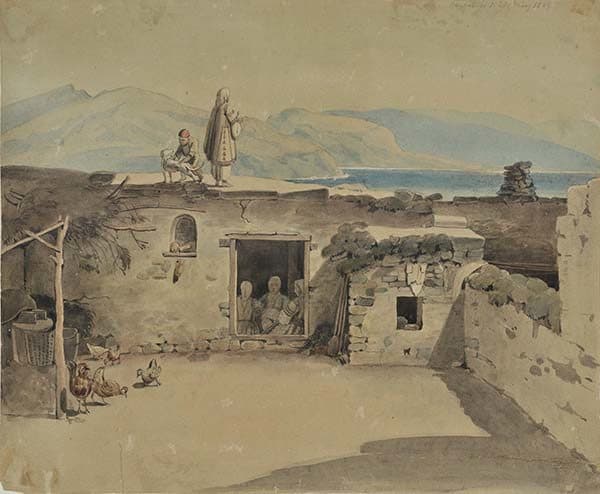 VILLAGES IN THE MUNICIPALITY OF AMPELAKIA

Kynosoura Kynosoura is a small peninsula located in the east of the island. The name probably comes from the shape of the peninsula, long and thin and pointed at the end. In the south are a few houses. In the north are the remains of an ancient tumulus thought to be the burial site of Greek warriors in the Battle of Salamis. Nearby is a dockyard, which constructs and fixes ships including oil tankers and containers. Selinia Selinia is a resort located a few kilometers southeast of Salamis city. Selinia is the weekend resort of many Athenians due to its proximity to Athens. Selinia also features restaurants and taverns.